STAGING INVENTORY FROM MY HOME

Our staging team was in the middle of preparing this home for sale when Ontario announced the Declaration of Emergency. We had the report from Heather at Styled and Staged but not the needed inventory. Since she could not operate we had to get creative with how we staged this home. Looking around my own home I had an idea! Let’s stage this house using all the art and accessories from our own home! That’s exactly what we did. 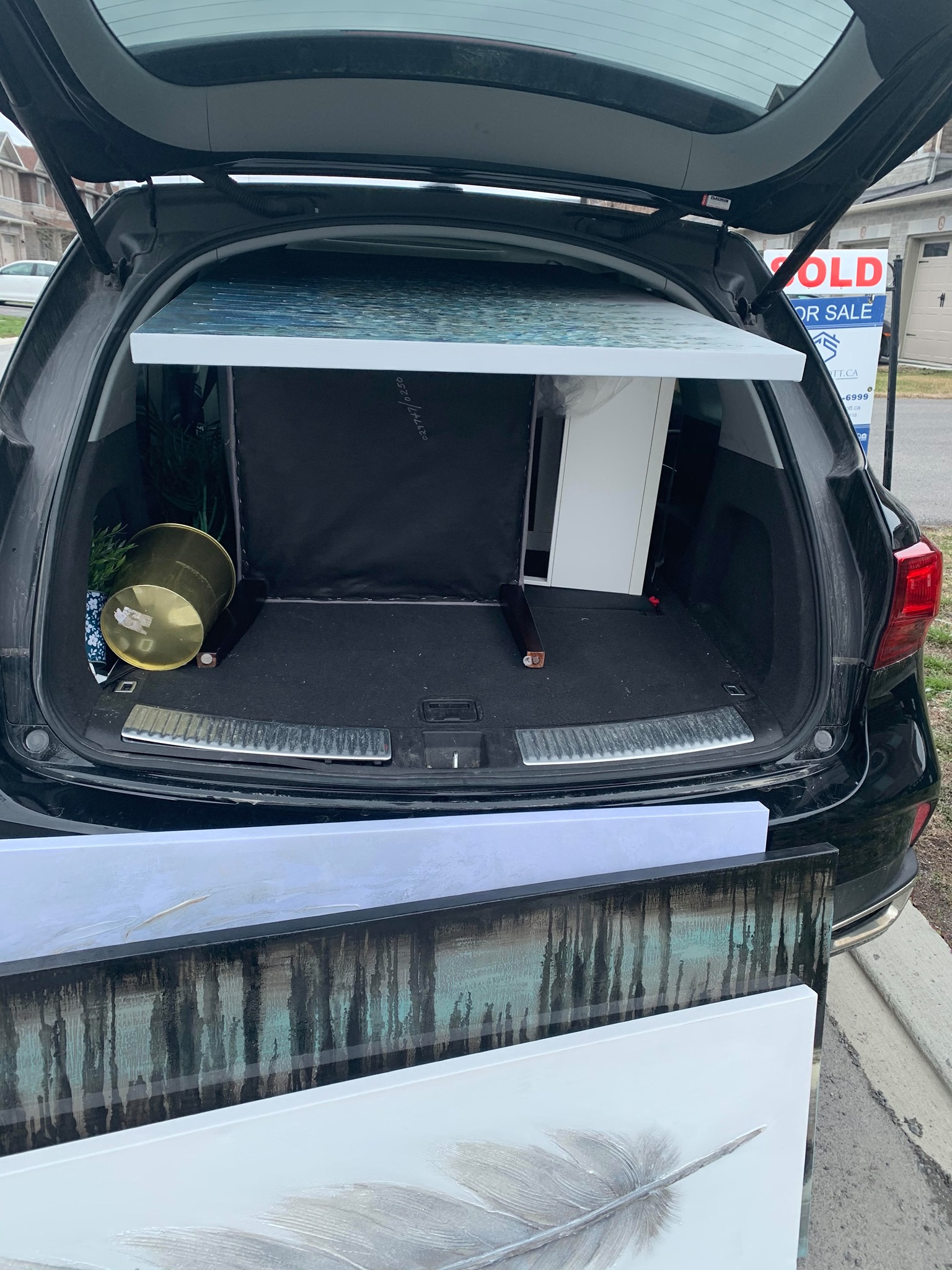 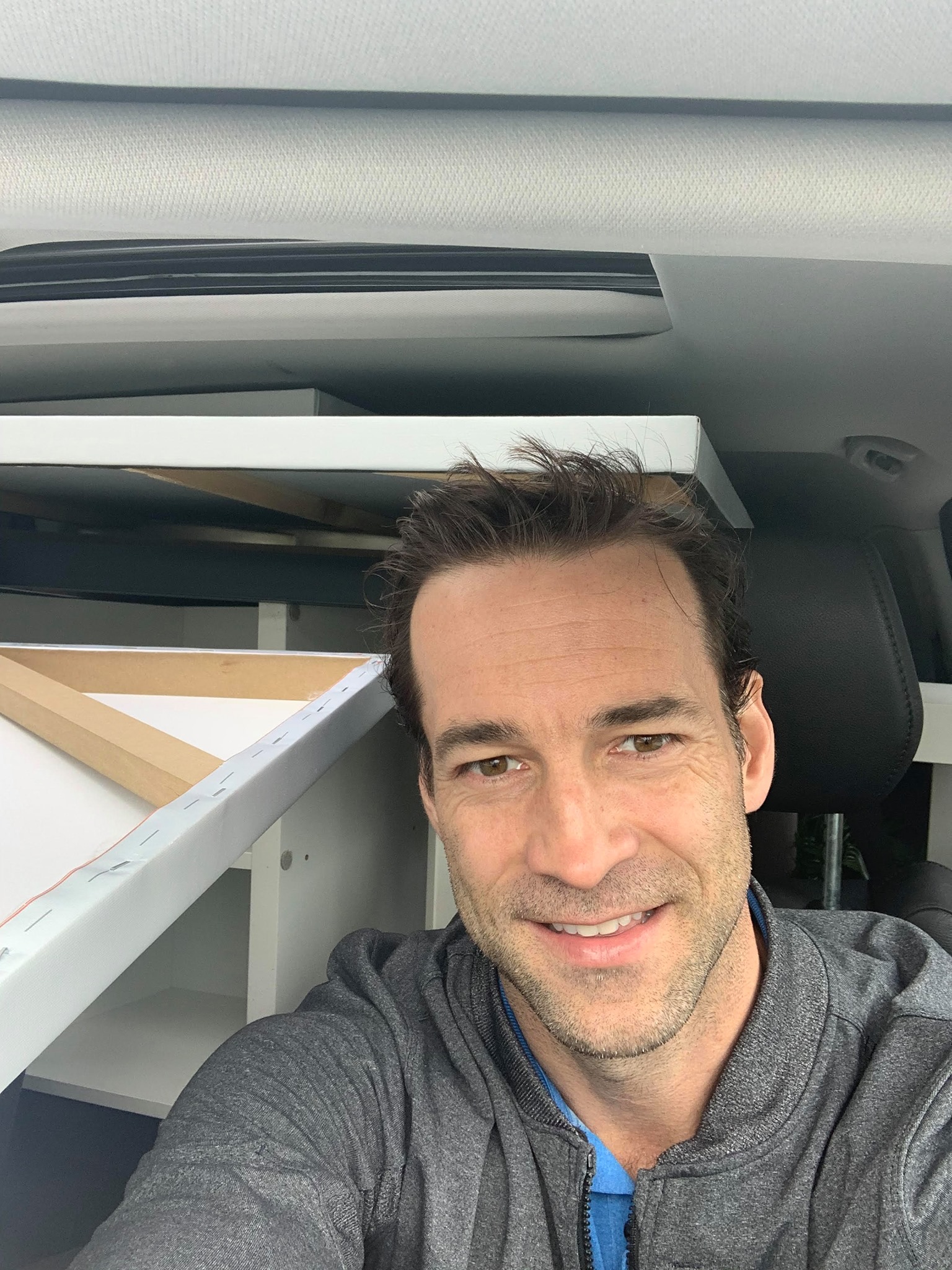 Our team’s suggestion for the foyer was to remove the shoes and items on the floor. We also suggested removing the coat tree since it looks like there isn’t any closet which there is. Suggested a little mat for inside the door so when buyers come in they don’t drag dirt on to the nice wood floors. For the photos and showings, we recommended the roller blind should be rolled up or removed.

We suggested breaking up the sectional top open up the area.  Only moved the sofa along the long wall and put the loveseat in the back-sitting in.  Also, put the ottoman in the sitting room. We suggested to bring down the chair and ottoman from the front bedroom. We adjusted the area rug for the new layout. We brought in artwork from Chris’s home for above the sofa. We kept the floor lamp. We thought it fit well with this room.

The dining room was already pretty clear. We suggested removing everything on the such as the bike. We also suggest painting the ceiling and replacing the burnt-out light bulb.

We suggested the kitchen counters be cleared off. We suggested for photos to not have anything around or in the sink and to remove the calendar and everything on the side of the fridge.

We suggested removing the blinds just for photos and showings. We left the coffee table and the TV stand the way it is just to tidy up the TV stand. We brought the other half of the couch from the living and centred it between the windows. We added some artwork (again from Chris’s home) above the couch as well to complete the room.  We suggested just the ottoman in front of the window as we thought space might be tight with a chair.

We suggested the chair and stool go downstairs to the living room and to remove the blinds for photos and showings. We also suggested removing the wooden bookcase. Our staging team brought in night tables and lamps to complete the room.

We suggested everything to be cleared out of this office and brought in a computer desk and chair from our staging inventory.

We ended up in a multiple offer situation and our clients got a great price for their home.

Further slowdown in August We are seeing a slowdown in the market as there are more options for buyers....

This month’s video update is a little longer than usual, and there is a great reason, we are in...

Market Correction or Crash? I think everyone understands that the Ottawa real estate market is a much different landscape...

Andy Scott
23:07 29 Feb 20
Chris worked with me and my wife to find our “dream home” for over two years. We certainly weren’t easy clients... we were interested in Westboro, Manotick and Stittsville, and at one point switched gears to cottages! Chris remained so incredibly patient with us, full of information about the neighborhoods we were looking in, and had so much great advice about the process as a whole. He impressed us in negotiations too, and as a result of new information that came to light in the final hour, he recommended a last minute slight increase in our offer that (we would find out after) wound up being the difference between us losing the bidding war or securing the precise home we has been looking for. We had an amazing experience working with Chris and his team. I highly recommend Chris to anyone that wants a realtor with a passion for real estate and a drive to find the perfect home for his clients. It has been a few months since we closed on our house and, now that we are settled in, we find ourselves toasting Chris Scott Homes all the time! Thanks again!

Martin Roy
18:11 20 Oct 19
My wife and I worked with Chris for weeks in preparation for our house hunting trip (military move). He was quick to adjust to our search parameter changes so we felt well prepared for our house hunting week. Partly due to that preparation, we were able to make a successful offer on day 1. Chris was instrumental in helping us with the offer but also in assisting us getting ready for the move. This has been our easiest move so far thanks to him. We strongly recommend the Chris Scott team to anyone looking to buy a house in the Ottawa area.

Eric
20:10 11 Oct 19
Chris has been excellent to work with both times I've been looking for a home.I worked with Chris most recently when my wife and I were looking to purchase our first home together. Chris was a great listener, patient and provided excellent advice and expertise through every step of the transaction and made the entire process of selling my condo and finding/buying a home a great experience. We've been in our home for almost five years now and we couldn't be happier!

Don MacDonald
23:15 08 Oct 19
We moved to Ottawa from Colorado in 2017 and Chris had been recommended to us. He did an excellent job of setting up viewings and showing us around. Having Chris as your real estate broker doesn't end their though, he sends Birthday cards, Xmas cards and even drops off pumpkins. The follow on customer service from Chris and his team is really appreciated.

Line Fortin
20:19 03 Oct 19
During our House Hunting Trip (Military term) our agent Colin had our showings booked as we requested shortly after arriving in the area. He had a well laid out schedule for the showings right from day one. He kept good notes on our comments from each showing which was very helpful. Colin made us feel comfortable and he understood the type of home we were looking for and stayed within our budget. He made sure the house inspections were booked which was very convenient for us. Thank you Colin we really enjoyed doing business with you and the Chris Scott Realty team.

Brittany Wilson
15:38 03 Oct 19
Chris sold our home in 2018 & hands down is the best real estate agent we have ever worked with. My husband and I are both in commercial real estate but still decided to use Chris & his team due to their wide market knowledge and extreme success rate. Chris was successful at selling our home quickly and at the price we wanted. This team is not only highly capable, but also extremely communicative and very professional. We will use Chris & his team again & again - we couldn’t have been more impressed!

mackenzie Thompson
02:02 11 Jan 18
Had the best experience with Chris Scott ! I found my place in a week and was moved in within the month and now am writing this review in the comfort of my couch in my beautiful new home ! I couldn’t be happier with the service from Chris aswell as his lovely assistant Steph, who helped so much along the way, and still to this day. Thank you Chris and Steph !!! I love my new home and it’s all thanks to you !!! 😁😁😁

Robert Hogg
15:15 19 Dec 17
This year we sold our Ottawa house utilizing the services of Chris & his team. We were very pleased with the professional service provided. Chris executed an excellent marketing strategy to best showcase our house. On-going communication kept us in the loop at all times. Great job! So good in fact that our daughter/son-in-law were also so impressed that they engaged Chris & his team to sell their Ottawa Condo. Both properties sold to our satisfaction. We all fully recommend Chris & his team to sell your home.

Derek Pickering
14:44 07 Oct 17
Chris was very accommodating to us throughout our long process of finding a house in Ottawa! His patience, professionalism, and reassurance kept us confident that we'd find a place after 7 unsuccessful offers. I'm very glad we had Chris to navigate us through the Ottawa real estate market. Thanks Chris!

Denise D'Astous
22:15 03 Oct 17
We moved to Ottawa few year ago in the Ottawa Area. We Seek Chris Scott Services. He was able to pin point exactly which area and house we were looking for. He make sure to keep in contact with his customer. If you ever need help to buy or Sell a house please seek Chris Scott Service and you will not regretted.Denise and Mike

Kenny B
18:35 05 May 17
If your looking for a realtor that is there for you and listen to your need, then look no further Chris Scott, was there for us from the minute we touch ground, being military and only having one week to found a house, Chris was dedicated and there for us, he is really knowledgeable and know the in and out of the city! Once again! Thank you Chris for your exceptional services!
Next Reviews
MENU